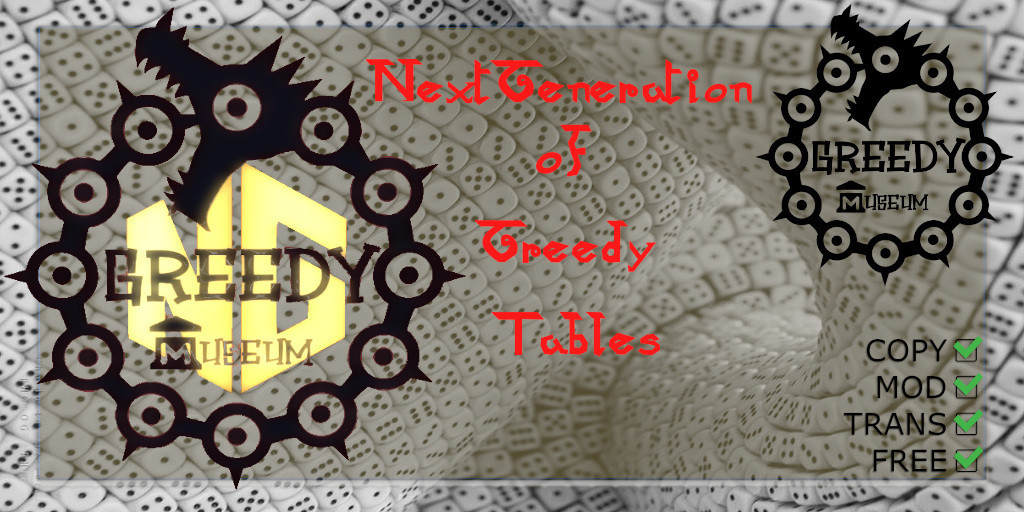 *** NEW RELEASE ****NG - NEXT GENERATION GREEDY GAME TABLES *** Available for FREE and FULL PERM! Please read notecard READ ME before using table + controller as there are many extra features! I reproduce text from NC here though:
NG GREEDY TABLES NOW are in 2 pieces;

- Table itself (around 41 prims, depending on model used and only 3 scripts);
- Greedy Controller Board (GCB) (89 prims and 1 script); and it can be paired to only ONE TABLE!


ATTENTION: ALWAYS REZ THE TABLE BEFORE THE OTHER PARTS OTHERWISE THE PAIRING WON`T WORK! WHEN BOARD REZED IT SHOWS IN GREEN "SELECT A TABLE". WHEN PEOPLE STARTS PLAYING THE GAME, BOARD SHOWS "GAME IN PROGRESS" IN YELLOW. IF THESE SENTENCES DON`T SHOW UP, DELETE BOTH TABLE AND BOARD AND START ALL AGAIN.

ACCESS: U can now set who will be able to change the settings from ur table.

JOIN ON SIT (*): When selected, players will be added automatically to the game when they sit down. If not selected, they need sit down and click JOIN.

(*) Selected or not, players can play the game without sitting down (since they are not far away from table - see PLAY RANGE).

POINTS MODE:
KEEP: Let`s say player A makes 1,4K and leave two dices to be rolled. So next player, B, can choose either ROLL with this two dices left or click STOP and then ROLL again, so table will refresh to 6 dices to rolled. But If player B decides to roll with these two dices left and at least one of them is "1" or a "5" and press STOP he will KEEP the 1,4K points made by player A plus the score given to the dice selected ("1",100 points, "5", 50 points).

CLASSIC: Like on V6 tables, so no KEEP / STEAL mode enabled.

DEVIL DICE: When selected, eventually a devil will show instead of a numbered dice. It works like a "joker dice" u often see from SL tables: u can select any value to that dice to make a combo with a highest score possible. Eg: U have two "6". so u could make the devil dice to be a "6" so u will have 6,6,6 (600 points).

SOUNDS: When selected, sounds from table will be ON; when unselected, OFF (sounds volume can be controlled by the buttom VOLUNME);

PARTICLES: It refers to particles threw when game is over: when selected, ON when unselected, OFF;

CHAT: It refers to open chat messages coming from the table during a game: When selected, ON (a); when unselected, OFF (b).

(a) Open chat will be read by players only though. Very handy if u need rez 2 or more tables, close to each other.
(b) Only table reset and winner info will be displayed. Very handy for rezzing tables at club areas.

POINTS TO WIN: It refers the max points a player should reach to be the winner;

POINTS TO JOIN: It refers the min points a player should have to be "in the board".

PLAY RANGE: It refers how far in meters a player can play the game and be recognized by the table. In this case, player needs to press JOIN to join the game. If it occurs the player is > 64 meters, table will do the self cleaning.

ROUND TIME: Time in seconds, a player can play his turn, starting conter AFTER player rolls the dice.

SKIP IDLE: Time in seconds a player has to roll the dices when its ur turn, otherwise a red skip button will show up (between ROLL and STOP on table) and ANYONE (*) can skip the current player.. Very handy for lazy players who are watching Facebook instead of playing greedy lol).

OBS: When SKIP IDLE is selected to 0 (zero) it will be considered as disabled during the game.


SKIP POINTS: It refers the points given to who skips a player. A such nice incentive to skip lazy players :)

VOLUME: As name says, it controls the volume of sound from table.